Saana Hickling
Shadow Tweetie is an antagonist in Jolly 3: Chapter 2. She is a shadowy version of Withered Tweetie.

Shadow Tweetie has the same appearance to her older version. However, she is black, grey, white (violet in the Extras and during her jumpscare) and phantom animatronic-looking.

Shadow Tweetie becomes active on the second night. She will begin to assemble and build herself in the Office Base the longer you stare at the animatronics in the camera. If she fully assembles and finishes building up, she will jumpscare you and cause a ventilation error. 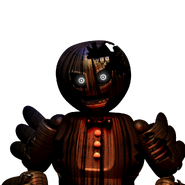