Shadow Maxie is an antagonist in Jolly 3: Chapter 2. She is clearly a ghostly version of Withered Maxie from Chapter 1. It is currently unknown, what happened for her to be like this way, but the most likely explanation is that The Protagonist is having hallucinations of her from his experience aboveground.

Shadow Maxie looks highly similar to Withered Maxie, except that she is a darkish purple color, and has a burnt texture like the Metal Animatronics from Chapter 1, as well as a much more black color.

Shadow Maxie becomes active on Night 2, and she will start appearing in a random camera. If you see her, quickly switch to another camera, or quickly put down the camera. Otherwise, she will appear in your face and stun you for a few seconds before leaving, similar to Phantom Puppet's behavior from Five Nights at Freddy's 3, putting you at HIGH risk for Withered George or Withered Jolly to enter and kill you. 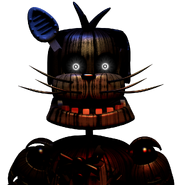 Maxie from the Custom Night selection. 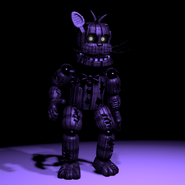