It has a stage with Maxie on it as well as a few decorations on the stage and a checkerboard pattern for the floor.

This is Maxie's starting location. 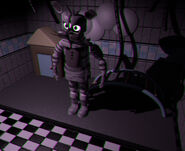