Jolly 4
Maxie Goodtime will be an upcoming antagonist in Jolly 4.

Maxie Goodtime resembles a stylized combination between Maxie and Withered Maxie. She has a white coloration, two White Tiger ears, a tuft of fur on her head, thick eyebrows, pink cheeks, and a skirt similar to Hetty, but with an M on it.

Like the other Goodtimes, Maxie's head is vertically divided in half.

A close-up look at Maxie Goodtime in the Jolly 4 poster. 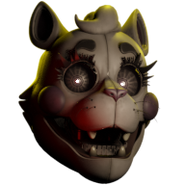 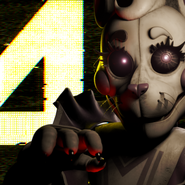 An icon for Maxie Goodtime, created by Mechlus.
Community content is available under CC-BY-SA unless otherwise noted.
Advertisement