Jolly the Bee had an old jumpscare that was in the game for two years until the widescreen (1.5) update somewhere at around 2018 and was replaced with a better one because IvanG didn't like it. The old jumpscare can still be seen in the mobile version and the extras, however. The new jumpscare is much more detailed and a lot faster than the old one.

Tweetie had an old jumpscare where she has no lighting, and that she lacks the endoskeleton head, making it as if you got jumpscared by a Tweetie suit instead of the actual Tweetie. This jumpscare animation was unsatisfactory, so IvanG replaced it with a new one that includes the lighting and the endoskeleton.

"The Map that you see in the camera was supposed to glow, but then the idea was dropped due to it making the game more futuristic than scary."

"Jolly was supposed to run while going in your office but then it was dropped due to the animations being unrealistic and too childish. Ruining the games realism."

Unused Animation Of Jolly Running To The Office

Unused Animation Of Jolly Jumpscare In The Office Window

"The Icon on the demo actually wasn't final. After the demo was released, its made simplistic icon to replace the current one".

There was meant to be an Easter egg where Withered Freddy, from IvanG's past game, "Five Nights in Minecraft", would appear in place of Metalionette in the Parts & Service room in CAM 11. It is unknown why this was scrapped, but it is possible that it would distract the AI of Metalionette or other reasons.

Metalionette in Front of You

Due to Metalionette being a "Keep the camera on or you're dead" mechanic, Metalionette appearing infront of your office was removed. Metalionette was supposed to travel through the elevator along with the "others". But then this would make the gameplay more repetitive, hence taking down the idea.

Unused Texture Of Metalionette At The Office Window

There was apparently a sign of a "Golden Tweetie", as shown in the FNAF fangame wiki, posted on November 23rd, 2017 on the wiki. It is unknown what she represents, but was possibly scrapped primarily due to Classic Jolly existing. It is possible that Golden Tweetie could mean that Tweetie was going to be the main antagonist of the game before it got shifted to Jolly. 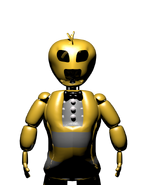 There was a Classic Jolly jumpscare in the files of the Jolly 1 beta demo. It is the same as the current one, but without the red pupils and the image doesn't flash.

Hidden in the files of Jolly is a newspaper titled "Technical difficulties", which has a grayscale image of Jolly the Bee without eyes and faceplates. It is said in the newspaper that Jolly's faceplates fell on a minor's head, crushing them to death and leading to the closure of Jolly's Fantasy World. It was also said that it had also lead to the events of the now removed Jollibee's with the animatronics. It is unknown what purpose the newspaper serves, but it was stated to either be a secret demo ending or a very secret full game ending.

Hidden in the same newspaper are some more Easter eggs of IvanG talking about his confusion on how "Five Nights in Minecraft" became very popular.

The Marionette/Puppet was meant to be in Jolly 2, but was left unused for unknown reasons. 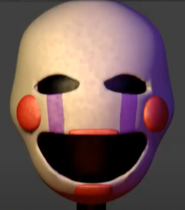 Classic Jolly and Freddy appear in the menu for Jolly 2. However, in the files, Chica was originally going to be in the menu. It is unknown why this was scrapped. It's possible that Bonnie, Classic George and possibly Foxy were going to have these as well. However, she can be seen for split seconds when the screen flashes on the title screen.

The menu looked different before. It was changed to make it look more original.

The entire game was originally just going to be an Update 2 to Jolly 3. Later, IvanG stated about his decisions of making the game separate from Chapter 1.

"Update 2 was initially planned to just include a “post-night” game with Jolly and George, but then I realized that there has to be more in the update. But adding more content to the second update will make the game’s size bigger. Making it quite impossible to upload it here in GameJolt with our very slow internet. That’s why I’ve decided to release Chapter 2: Underground not as an update (Update 2) to J3, but rather as a seperate game.

Making it as a seperate game will enable me to add more content to the chapter. Heck, a freeroam game might be added. Who knows? ;)"

There's an unused map shown in the Extras. What it would've been used for is currently unknown. 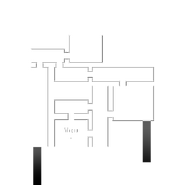 There's an unused image in the files that refers to scrapped Endless Mode, just like Jolly 3: Chapter 1. Judging by the picture, the player would need to survive as much as possible in free-roam mode.

Jollibee, Hetty, Yum, Popo and Twirlie all had old jumpscares in the demo of Jollibee's. Yum even had a jumpscare made for his minigame in the demo, which is the same animation but in different lighting, but the animation went unused due to the demo only containing the main night modes and no minigames.

Jollibee's unused jumpscare in the demo

Hetty's unused jumpscare in the demo

Twirlie's unused jumpscare in the demo

Popo's unused jumpscare in the demo

Yum's unused jumpscare in the demo.

Yum's other unused jumpscare in the demo, meant to be used for Night 1's post-night minigame.

These jumpscares were changed for the full game to have black eyes with red irises instead of their regular eyes, to make them appear more intimidating. Twirlie and Yum's jumpscares also had to be reanimated for unknown reasons, possibly because IvanG didn't like them or that they weren't animated well, especially with Twirlie.

Someone digging thorugh the Jollibee's files found a scrapped shock button. This may have been an idea similar to the Jolly 2 stun mechanic.

Originally, Mac Tonight was going to make an Easter egg appearance in the game in front of the office window. The Easter egg may or may not have been scrapped and is unknown if it appears at all.

The moon man in all his glory!

The trailer showed a maximum of 150 boxes when the maximum is 100 in play.

The jumpscares for Phase 2 were edited with a brightened, deep-fried filter to give them a red and yellow palette. The unedited versions can be seen in the extras.

Jollibee's As Above So Below

The entire game was scrapped for copyright reasons. It would've featured:

unused content will be found once the game is released.