The Kitchen, also known as Cam 1, is the location in Jolly where the Night 5 cutscene takes place. In it, an employee added poison in the food, which lead to the kids being poisoned.

Jolly and Tweetie will appear in this room in main gameplay. In the cutscene after Night 5, you see the kitchen from Jolly's perspective. 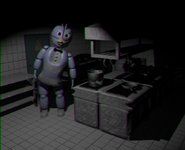 Tweetie in the location. 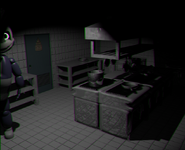 Jolly in the location.

The kitchen as seen on Night 5's cutscene.
Community content is available under CC-BY-SA unless otherwise noted.
Advertisement