Jolly 4
Jolly Goodtime will be an upcoming antagonist in Jolly 4.

He resembles Classic Jolly and presumably Phase Two Jollibee, but much different. As told by the only known pictures, this version of Jolly wears a top hat like Freddy, instead of his usual chef hat. He also appears to have opening faceplates, and he now has additional features, such as a black nose and black cheeks and three black freckles. He has eyebrows and glowing red eyes attached to his endoskeleton. His color scheme is dull grey, dull black, and dull yellow. He appears to be wearing a grey suit with two buttons and a yellow bowtie. He also wears yellow shoes. 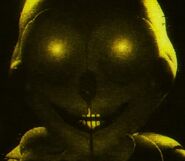 Jolly Goodtime in the first version of the thumbnail 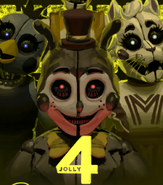 A close-up of Jolly Goodtime in the poster.
Community content is available under CC-BY-SA unless otherwise noted.
Advertisement