View source
watch 01:36
We're Getting Mutants in the MCU - The Loop
Do you like this video?
Play Sound

Underground
The Jolly Entertainment Underground Facility is the basement of the Jolly Factory and the main setting of Jolly 3: Chapter 2.

The Jolly Entertainment Underground Facility was created by Jolly Entertainment to serve as the framework for their animatronic tests, such as testing Jolly with his mechanisms and Fire Accident Response system. It closed after an electrical explosion occurred during the Antonette prototype test, which caused the death of hundreds of people.

Years later, Jack Carson, after getting artifacts from the first floor, goes to the underground facility to obtain secret files from the facility's computers in order to understand what happened.

It is a fairly large underground building that has fallen into disrepair. It has dirty, dusty walls with vent shafts and flooring tiles with missing tiles, revealing the concrete beneath. The rooms mostly have rusty pipes, metal vertical pillars that hold up the ceiling, construction lights, and bridges with metal bars and wireframe floors.

The whole facility mostly consists of yellow lighting, but in some of the rooms, it has red or blue lighting.

The abandoned facility is the main setting of the game. The player starts off heading down an elevator to the facility, and when they reach the Office Base, they'll be able to use the cameras around the facility to track down Withered Jolly and Withered George's movements. There are 4 different areas of the building. Jolly will go through the left side of the facility (Areas 1 and 3), while George will go through the right side of the facility (Areas 2 and 4). There are a total of 14 cameras in the building. When starting a new game, and during Night 5, the player is able to search around the facility by themselves, but must be careful of encountering Jolly or George.

The second teaser for the Underground, featuring Withered Jolly. 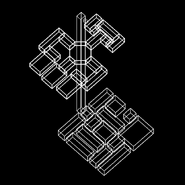 The Jolly Entertainment Underground Facility connecting to the Jolly Factory
Community content is available under CC-BY-SA unless otherwise noted.
Advertisement