Jolly's Fantasy World is the main setting of Jolly.

Before the November of 2017, Kevin Johnson opened Jolly's Fantasy World, a restaurant which did not yet have any animatronics but uses the Jolly name for its branding. However, around November in 2017, a new restaurant opened, known as Circus Baby's Pizza World. After this, many fast food restaurants' income dramatically dropped due to lack of attention, since many people wanted to visit Circus Baby's and see their state of the art animatronics. However, Kevin Johnson did not want to have his establishment be put aside, so he issued a new line of robots which are based off the old cast. These new animatronics included Jolly the Bee, the restaurant's titular mascot, Tweetie, Maxie and George. However, in the ending of Jollibee's Phase 2, it is revealed that these animatronics were actually being used to test the reliability of using robots to preserve human life. After five children were poisoned by a man wearing a blue security uniform, it is shown that the dead children are put into the chest cavities of these robots to see if they can become possessed, the same way the soul energy in FNAF 3 made William Afton become immortal.

During the events of the game, the animatronics move around in the restaurant during the night, since they see Mikhail with a blue security guard uniform and assume he is their killer. Mikhail gets fired after his 7th night after he broke into the building and beat up and disassembled the animatronics, resulting in them getting damaged and parts scattered throughout the place. From that point on, Jolly’s Fantasy World was closed down. 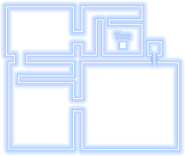