Note: This game got taken down due to legal reasons with the real life Jollibee Fast Food chain.

A place where fun and magic come to life, where food is best and parties are better!
Play games with Popo in Popo's Playroom, celebrate parties with Yum, and be entertained by the one and only!

NOTE: We are not responsible for any harm or damage done to you and your children. Please read the terms and conditions before entering.

This game takes place after the events of Jolly.

On the day of November/10/2017, an unknown man in a blue suit (possibly Mikhail Schmidt) broke into the restaurant's kitchen, and put something into food, which were unknown chemical substances. He gave it to the children, poisoning them. Their parents called the police and Jolly's Fantasy World has shut down ever since.

20 years after the incident, the player (Justin Smith) is working the night-shift at Jollibee's. Every night, you must keep track of the animatronics to stop them from getting in your office. You must check the cameras to locate them. On the cameras, you can check for them throughout the building and in the vents by clicking the "CHANGE FLOOR" button. Aside from checking the cameras, you must shut vents, "close" lights, and flash your light to keep them away.  There is a vent to your left, a door in front of your desk, and a window to your right. The vent and window require flashing the light to keep the characters from getting you into trouble. However, the door requires shutting the lights off so they think the office is an empty room.

You will have to defend yourself from five characters as the nights progress. The first animatronics active are Yum, Hetty, and Twirlie.

1. Yum: He will come from Yum's Party Room, into the Party Hallway, and then to the Supply Closet. After that, he'll attempt to climb into the vents, starting in Cam 13. You have the option to shut the vent in front of him. If you leave it open, Yum will come into your left vent. If you hear him banging in the vents, look at the office vent, shine the light (CTRL) into his face to make him retreat back to his party room.

2. Twirlie: She will come from Twirlie's Show Stage. She can take two possible routes. She can go through the Lobby, into Kitchen B, into Kitchen A, and finally into the Front Hall. Or, she can go through Kitchen A, and into the Front Hall. After taking either of those routes, she will then appear in the window in the door in front of you. If she's visible there, shut the lights off so she'll think the room is empty.

3. Hetty: She starts off in the Parts N' Service room, which is the huge window to the player's right. She'll start getting up from the floor and escape into the vents. To stop her from escaping, constantly flash the light at her to make her go back to her first position. If the player ignores her and the window is empty, the only defense left is to shut the vent that she's on. But, sealing two or more vents can easily drain the breath meter, making it tedious to seal her on nights 2 and on.

4. Popo. He'll start in Popo's Play Room, into the Party Hallway, then into Cam 12. In that cam, the player can shut the vent, or let him through. If they let him in, he'll come through the office vent (signaled by a loud banging noise). DO NOT shine the light on him or it will result in instant death. If the player ignores him, he'll go back to Popo's Play Room (signaled by a reversed version of the noise when he enters the vent entryway).

5. Jollibee. He'll start in Jollibee's Show Stage and make his way to the Party Hallway, and into the Front Hall. After that, his red eyes be visible in the door in the office. When he is at the door, turn the lights off and he will go away.

After each night, the player is given an optional task. This is where he must go into the show stages and party rooms to complete the task assigned by your manager. These tasks are optional because the player can ignore these tasks by leaving the building.

1. Yum's Party Room task - Fix the blown fuses in his party room. Take out the black fuses by holding them and exchange them for the red fuses by clicking them and clicking an empty area to put it there. There are 10 fuses to be exchanged. Behind the player, is a large area with three lights. Yum will try to get closer via an audio cue. If he is on one of the three sides of the room, hold the light on him by clicking and holding the left mouse button on the area he is at to make him retreat to his stage.

2. Twirlie's Show Stage task - Tighten the loose valves on the ceiling in her show stage. Tighten a valve by clicking and holding it until the red icon next to it turns green, as a sign of it already tightened enough. There are 10 valves to be tightened. Behind, Twirlie is seen on her stage. She'll try to get closer via an audio cue. If she is close to the player, they need to hide under the dining tables by flicking down on the screen. Try to avoid her sight by hiding behind the dining chairs, and avoid looking at Twirlie. After some time, she'll get up and retreat back to her stage.

3. Popo's Play Room task - The player is required to tighten the loose screws on the monkey bars in his playroom. They should do this by clicking and holding the screws until they can't be turned anymore. There are 9 screws to be tightened. Behind the player is Popo on his show stage. He'll try to get closer via an audio cue. If he's up close, they must move the cleaning cart into the side of the room he's standing in. However, they need to react quickly though, because he can be fast sometimes. After successfully blocking him, he'll retreat back to his stage.

4. Jollibee's Show Stage task - Mop the floors in his show stage. Mop the floor by flicking down on the screen to face the ground and hold W to mop. Jollibee will try to get closer in the shadows. No audio, nor visual cues will be given when he's gone from the stage. So from time to time, check the left and right sides to make sure if he's there. If he's not there, get back to mopping. However, if he's there, hold the light on him to make him retreat into the shadows. Press CTRL to shine the light and use the mouse to aim it.

5. Fix Hetty task - This task can result in two different ways. Both of them can lead up to one other ending.

A pixelated version of the menu.

The main menu of the demo. 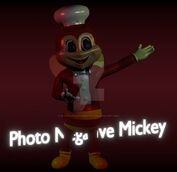