George Goodtime will be an upcoming antagonist in Jolly 4.

His head is also vertically split in half, and he has brown cheeks, thick black eyebrows and stripes, a much brighter orange on his snout and around his eyes, triangular ears, and sharp fangs on his jaws. 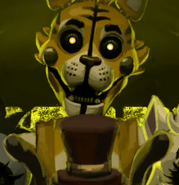 A close-up look at George Goodtime in the Jolly 4 poster.

George Goodtime looming in the background of a hallway in the warehouse. 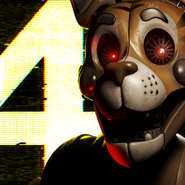 An icon for George Goodtime, created by Mechlus.
Community content is available under CC-BY-SA unless otherwise noted.
Advertisement